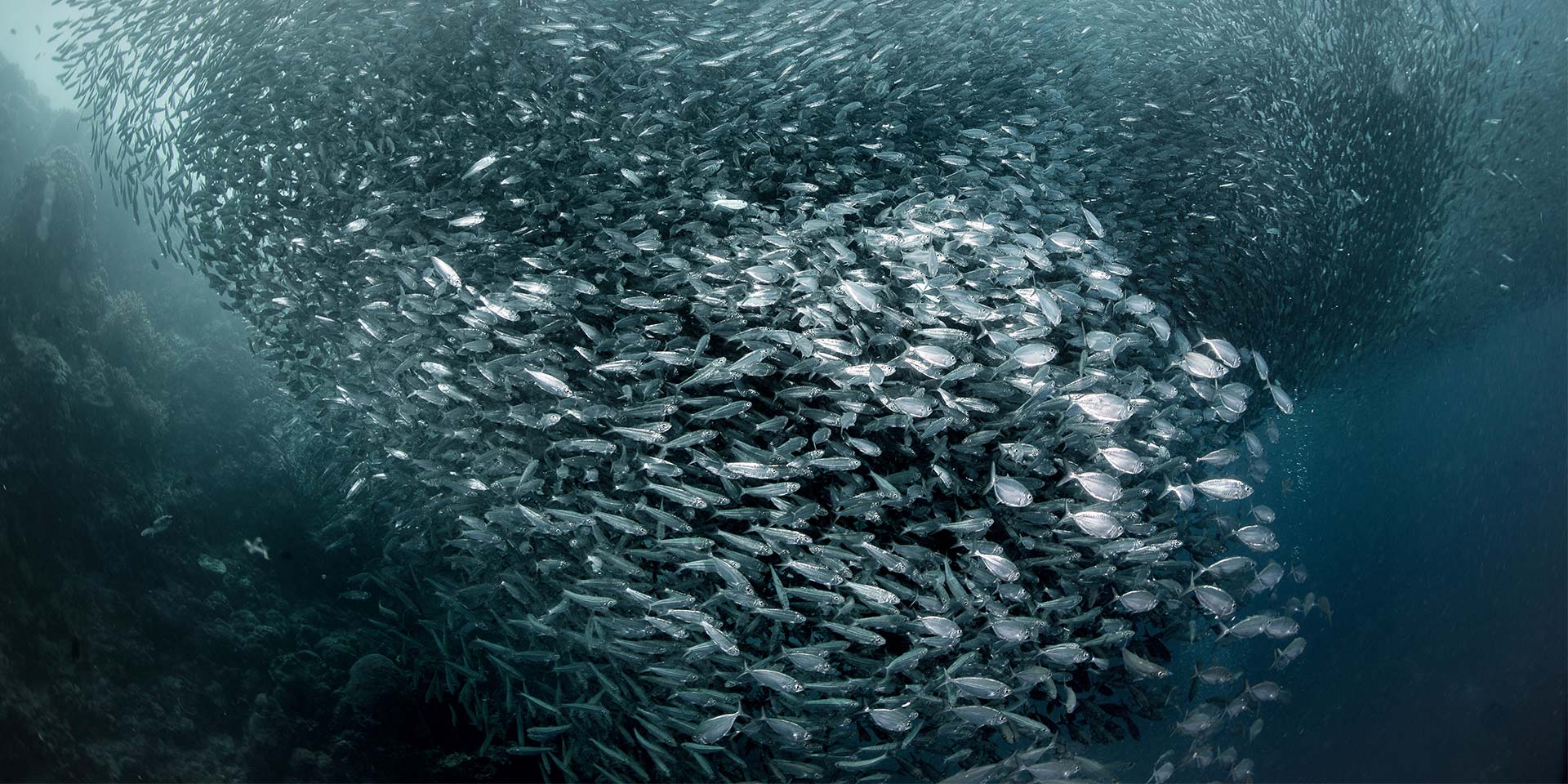 The words “sardine run” are synonymous with South Africa – and cold water. Experiencing this natural phenomenon is linked with multiple layers of neoprene or drysuits, and most of the time divers spend hours on the surface searching for the whirling bait balls. Meanwhile, the small city of Moalboal on Cebu (also known for the thresher sharks in Malapascua and whale sharks in Oslob) in the Philippines has sardines ready to see nearly every day of the year.

To be accurate, it’s more of a sardine hangout than a sardine run. The bait balls here do not migrate, but have made their permanent home about 20 to 30 meters off the coast of Panagsama Beach.

A short swim over colorful reefs takes you to the drop off of between 30 and 80 meters. It is here where the vast sardine bait balls congregate, consisting of sardines, pilchards, and sprats all grouped together. These bait balls, on occasion, attract large predators like tuna, barracudas, trevally, jacks, and even the occasional thresher shark. While the chance to see these predators adds to the excitement factor, the real allure of the sardine run is witnessing the vastness of these schools. While it is possible to see the bait balls by snorkeling, scuba diving provides the added benefit of entering the center of these bait balls – so big and dense as to block out the sun.

The experience of being surrounded by millions of fish, slowly churning about with silver light reflecting off their bodies, is awe-inspiring.

ABOVE: Traditional boat with sardines beneath.

The sardines of Moalboal used to congregate near Pescador Island, which is a 15-minute boat ride from Panagsama beach. For unknown reasons they have re-located closer to Moalboal. While they ‘disappear’ every now and then, they always return to this spot, making sightings nearly guaranteed every day of the year. The fish are not rounded up or fed, giving visitors the opportunity to experience this natural phenomenon in an ethical manner.

The government has recognized the importance of the sardines for tourism and thus have banned fishing with nets. Local fishermen are only allowed to make use of lines and hooks off of traditional boats.

Besides the sardine run, Moalboal has plenty to offer divers. Pescador Island is a favorite amongst underwater photographers with chances to see frogfish, ornate ghost pipefish and cuttlefish, amongst other critters. Although few dive centers mention it, there is a scuttled Cessna two-passenger plane that is well worth exploring – sunk specifically for divers. More experienced divers can visit Sunken Island where the pinnacle lays at around 25 meters. Sunken Island often has strong currents and the chance to see pelagics like sharks and mantas with the occasional whale shark thrown in.

Moalboal has two seasons: rainy and dry. Generally, the dry season falls between November and May, while the rainy season lays between June and October. Typhoon season is in September and October, but Cebu lays outside of the typhoon belt and rarely sees typhoons. The air temperature lingers around 32 degrees Celsius while the water temperature around Cebu ranges between 25 and 30 degrees Celsius while visibility can be anything between five to 30 meters depending on the conditions.

The sardine run in Moalboal is judged to be the second largest in the world, after South Africa. It may not offer the diversity of wildlife, but it is the opportunity to witness the vastness of marine life schooling, in warm, tropical waters.