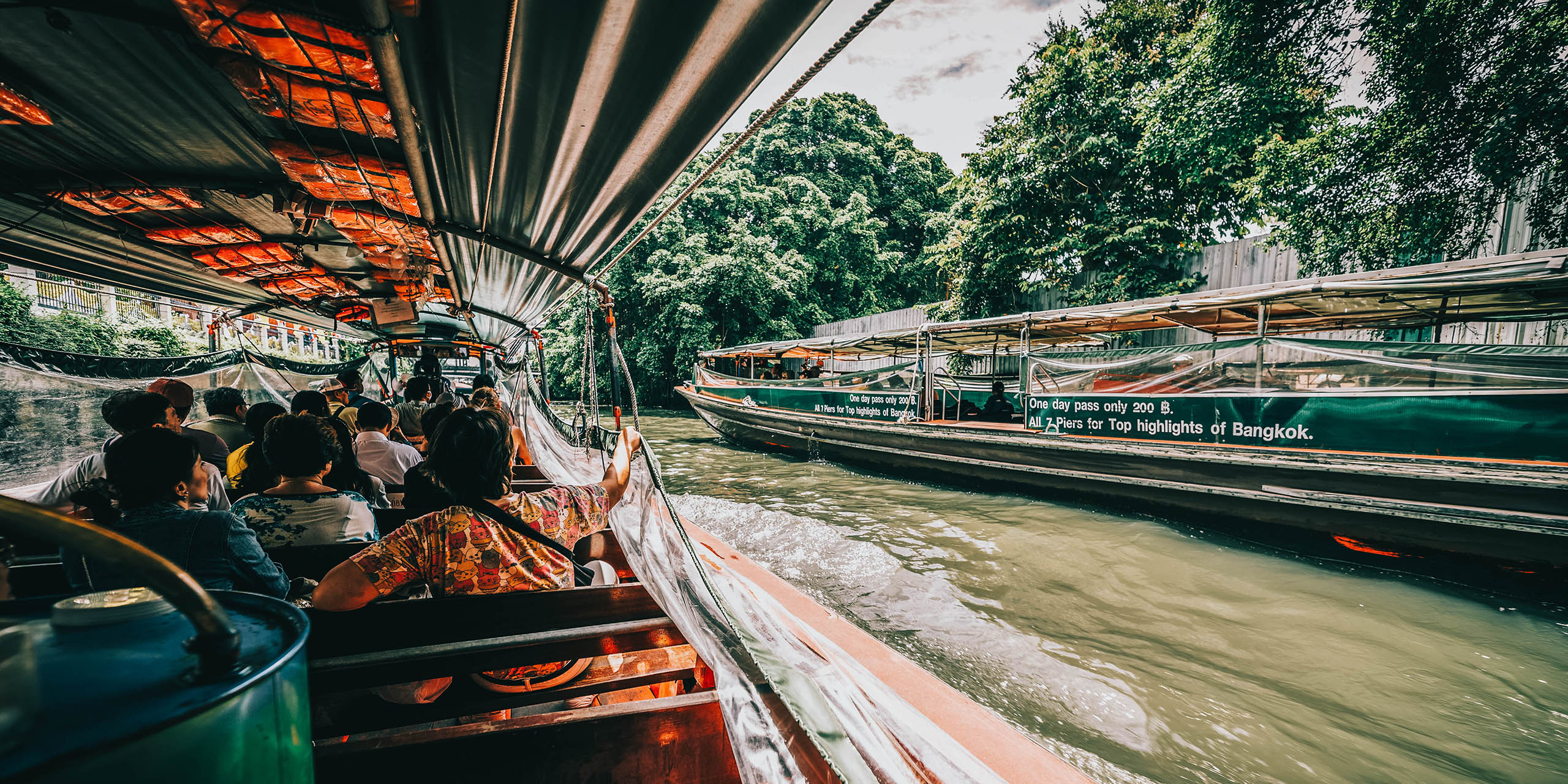 The fat red man has a faraway look in his eyes. He is naked, his modesty shielded only by his right arm which extends coyly across his lap. Motionless, he never shifts from his perch on the boardwalk of the old wooden house, where he wistfully observes the activity on the Bangkok Yai canal in the neighborhood of Thonburi in the Thai capital.

Such eccentricity is commonplace at Baan Sinlapin, (artist’s house), the centerpiece of the community of artists at Khlong Bang Luang. The community, which boasts vintage antique galleries and a few small art galleries, is dispersed around a string of wooden stilted buildings linked by a plank walkway by the canal.

Local artists use the atmospheric venue as a workspace and their efforts are showcased at regular exhibitions. The house is also home to fascinating resident pieces of work – including the corpulent canal-side daydreamer.

Such a scene is a world away from the traffic-clogged madness and neon-lit pulse of Bangkok’s commercial districts. Nevertheless, there’s a distinctly different rhythm to life by the sleepy khlong (canals) that course like veins through the Thai capital.

“These houses were in danger of being lost,” says Chumpol Akkapantanon, the artist owner of Baan Sinlapin, who bought and restored many of the 200-year-old structures in the community. “Due to commercialization and development, much of Bangkok has been ruined. However, life here on the canal inspires a simpler, more creative, way of living. It is how the city used to be.”

Like every good metropolis, Bangkok is not short on nicknames. Locals know it as “Krung Thep”, or the “City of Angels”. Other common epithets, meanwhile, include “The Big Mango” and — in reference to its notoriously permissive nightlife — “Sin City”.

Rarely used nowadays is the label “The Venice of the East”, by which the city was once referred to due to its extensive, and economically vital, network of canals.

Bangkok’s first waterways were built around the time of the city’s establishment in the 18th Century by King Rama I as moats to protect against invasion by hostile foreign powers. As the city grew, however, the system of canals was expanded and boats became Bangkok’s main mode of transport.

At its zenith, the canal and river network stretched for hundreds of kilometers. It connected houses, public spaces, and temples and provided transport corridors for commercial goods.

European influence in the 20th Century shifted the city to a road-based system and many canals were filled in. The city’s phenomenal expansion in the latter half of the century, meanwhile, accelerated the dismantling of the canal network.

But while the remaining waterways have diminished in commercial importance, they still play a central role in the lives of the thousands of Bangkokians who continue to use them on a daily basis. They also provide an alluring portal to the city’s exotic past for visitors more attuned to the hyper-modern attractions of the commercial area.

There are three main ways to experience Bangkok by boat. Many of the city’s main attractions are congregated near the Chao Phraya River. These include temples such as Wat Arun (Temple of Dawn) and Wat Saket (Golden Mount) and the golden-spired grandeur of the Grand Palace complex. The river is also handy for historic districts such as Chinatown and backpacker-friendly Banglamphu, as well as more locally flavored enclaves such as Wang Lang Market, which is famous for secondhand merchandise and excellent street food.

Other quirky stops include The Jam Factory, an arts hub in the district of Khlong San, and River City, a mall and auction house with a focus on Asian antiques. River taxis ply the waterway, providing a convenient and atmospheric hop-on/hop-off route between the sights.

Like the main river, Khlong Saen Saep is heavily utilized by visitors as well as regular Thai commuters. Extending 18 kilometers southeast from Wat Saket, the canal spears through the city’s commercial heart. A ferry service offers an easy way of getting to big-hitting draws such as the shopping hubs of Siam Square and Pratunam, the antique-filled home of silk magnate Jim Thompson and affluent areas such as Thong Lor, the city’s hipster hub, which boasts a staggering array of flashy restaurants, bars, and boutiques.

However, Thonburi is the best place to catch a prolonged glimpse of waterborne Bangkok. In contrast to the eastern side of the Chao Phraya (generally regarded geographically as Bangkok proper), the Thonburi canals continue to be the lifeblood for large communities. Many of the old teak houses that line the banks have postal addresses on canals rather than roads and boat-bound postmen still do their rounds every weekday morning.

Any number of idyllic Thai tableaus can be witnessed here. Local men while away the afternoon hours drinking Singha beers and playing cards while ancient-looking vendors, their faces wrinkled from excessive hours in the sun, proffer bowls of noodles from giant, steaming urns perched on tiny boats. Monks in saffron robes flit between countless, ornate temples and, of course, loveable urchins throw food to the fish before launching themselves in their underpants.

All scenarios could have been lifted from the big book of Oriental travel cliches but here is the only place you’ll find them in contemporary Bangkok.

Khlong tours by long-tail boat can be chartered at any of the central piers on the Chao Phraya and generally last for around two hours. There are no scheduled stops but boat captains are willing to stop on request. In fact, a number of tour companies offer full-day tours which offer more scope to explore the nooks and crannies of the khlongs.

“My ambition was always to live by the waterside here,” says Nikki Mallika, a Bangkok-born and bred TV producer who exchanged condo-life in the city’s busy Sathorn area for a canal-side Thonburi address two years ago. “When people think of Bangkok they generally don’t consider the city to be charming. Yet, it is here and only about 15 minutes away from the madness of the city.”

Back on the boat, the last light of the day drains from the sky, morphing into one of those immaculate South East Asian sunsets. By now we have looped round Thonburi to emerge in Khlong Bangkok Noi, another of the area’s main canals. As the water widens, the captain applies some extra pressure to the throttle, our boat hurtling over little bobbing waves and bisecting gaps between other boats like something out of a Bond movie chase as it approaches the Chao Phraya. The waterlilies and quaint teak houses are but a memory as the towering concrete dystopia of the city skyline reasserts itself on the opposite bank. From a slumbering Asian idyll to a conduit for rip-roaring exploration of one of the world’s great metropolises, Bangkok’s waterways cover all the bases.