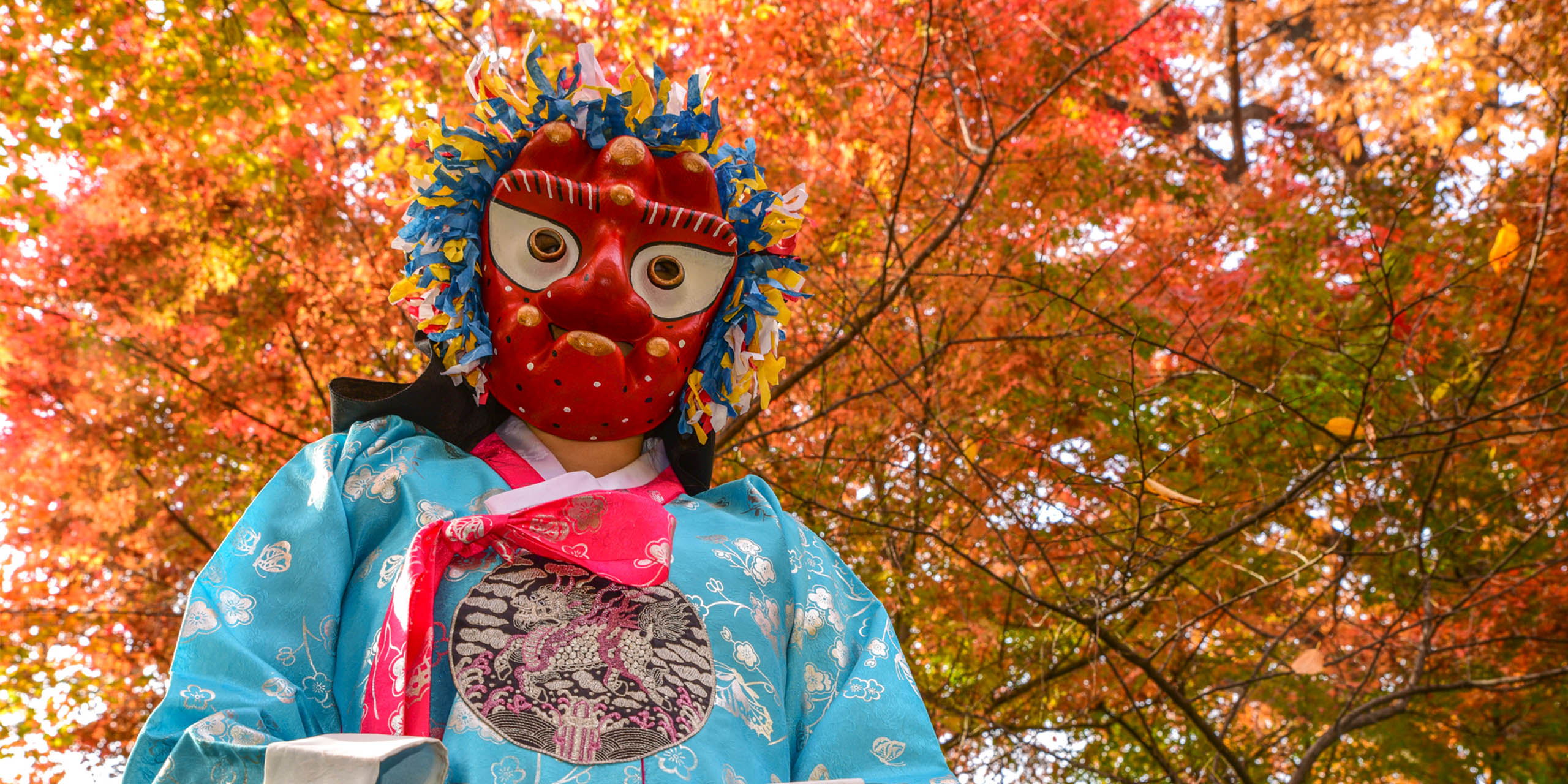 Hyojin Lee’s face has disappeared. She is no longer a Seoul marketing officer. Instead, she’s become a wild-eyed, crimson-faced demon with hair that stands on end, as though she’s been electrocuted. All the while, Lee stood high above me, her fierce new appearance and lofty perch making her appear dangerous. Capable of violence, even.

Of course, she remains benign.  She’s merely standing in a garden on an elevated terrace at Korea House, a Government-funded cultural center in Seoul that promotes ancient Korean customs and art forms. That’s the sedate reality hidden behind her alarming tal mask.

These are the varied functions of the tal, which have been shortlisted for UNESCO recognition as part of an Intangible Cultural Heritage application for talchum, an ancient Korean mask dance drama.

First worn by prehistoric hunters to give them a menacing appearance, tal later became used as sacred objects in religious ceremonies. These days they are primarily donned during talchum. It’s a highly sophisticated but endangered art form.

Blending music, theatre, and dance, it is broken up into 18 different styles, each of which is linked to a particular region of the country and has slight variations. Used within these styles are more than 100 different tal.

The best place to see talchum is at the annual Andong Mask Dance Festival, which takes place in September at Hahoe Folk Village, a rural location in central South Korea.

Later this year, UNESCO will decide whether to include talchum on its Intangible Cultural Heritage register.

South Korea already has many unique customs and crafts on this register which tourists can observe. They include pansori, a style of musical storytelling during which a vocalist mixes singing and speech to reveal ancient Korean tales against the sparse musical background of a single drum. Travelers can watch pansori at Seoul’s National Theater of Korea, which holds regular shows.

Or they can head to the Korean Folk Village, 35km south of Seoul, to witness a daring display of jultagi. Also featured on the UNESCO register, this form of Korean tightrope walking is more than 1,000 years old.

All three of those traditions are considered endangered. That’s because, in the modern age, these old-fashioned styles of performance must compete with an ever-expanding trove of entertainment options, many of which reside within our digital devices.

This, in turn, makes it more difficult to attract new generations of performers to act as the promoters and guardians of talchum. Yet, for many centuries, this mask dance was as influential in Korea as film or TV are now. It was the dominant form of entertainment.

What are the origins of tal, though? The answer is murky. There is no definitive date when Koreans first started wearing these face coverings. Historians believe tal has roots more than 1,500 years ago and were invented as a disguise by hunter-gatherers, who donned masks with an animal appearance to try to fool the beasts they were pursuing.

These prehistoric societies also wore masks during shamanistic ceremonies. They believed tal helped them communicate with deities or repel evil spirits. This custom created a belief, among later Korean communities, that wearing tal during a funeral could aid a deceased person in reaching the afterlife.

It wasn’t until many centuries later that tal became the focus of an art form. In the 1100s, historians believe the first organized talchum displays took place in Hahoe, the site of the aforementioned festival. Initially, they were loose and informal performances. By the 1400s, however, talchum had become finely honed.

All across Korea, troupes began thrilling audiences that gathered in villages and towns. Each developed different styles and themes. Their dances became more spectacular, their storylines more complex and their music increasingly intricate. Creating an upbeat, soothing or ominous backdrop to all of this – depending on the mood of the scene – was a band of musicians wielding drums, goings, flutes, fiddles, and oboes.

These troupes also tailored the style of their shows depending on their audience. Comedic and salacious content went down well with villagers while performing for the gentry or royalty required a more reserved and high-brow approach.

Although talchum has evolved considerably over the centuries and continues to, it still uses many of the same ancient instruments and stories. In most cases, its structure has remained consistent. Talchum is typically a three-act play centered around a trio of characters – the nobleman, the holy man, and the old lady.

The act focusing on the monk is intended to satirize religion, with this holy man proven as fallible when he is led astray by a beautiful woman. The upper classes are ripped apart in the scene of the nobleman, whose poorly-paid servants mock him cleverly. Then there’s the story of the elderly lady, who dies of a shattered heart after she’s betrayed by her husband, who then uses talchum to try to apologize to her ghost. This tale underscores the spiritual roots of tal masks.

Most tourists to South Korea won’t be able to fully absorb these tales, which are told and sung in the Korean language. Yet talchum remains engrossing thanks to its hypnotic movements, enchanting sounds, and the artistry, variety, and intensity of its ancient tal masks.