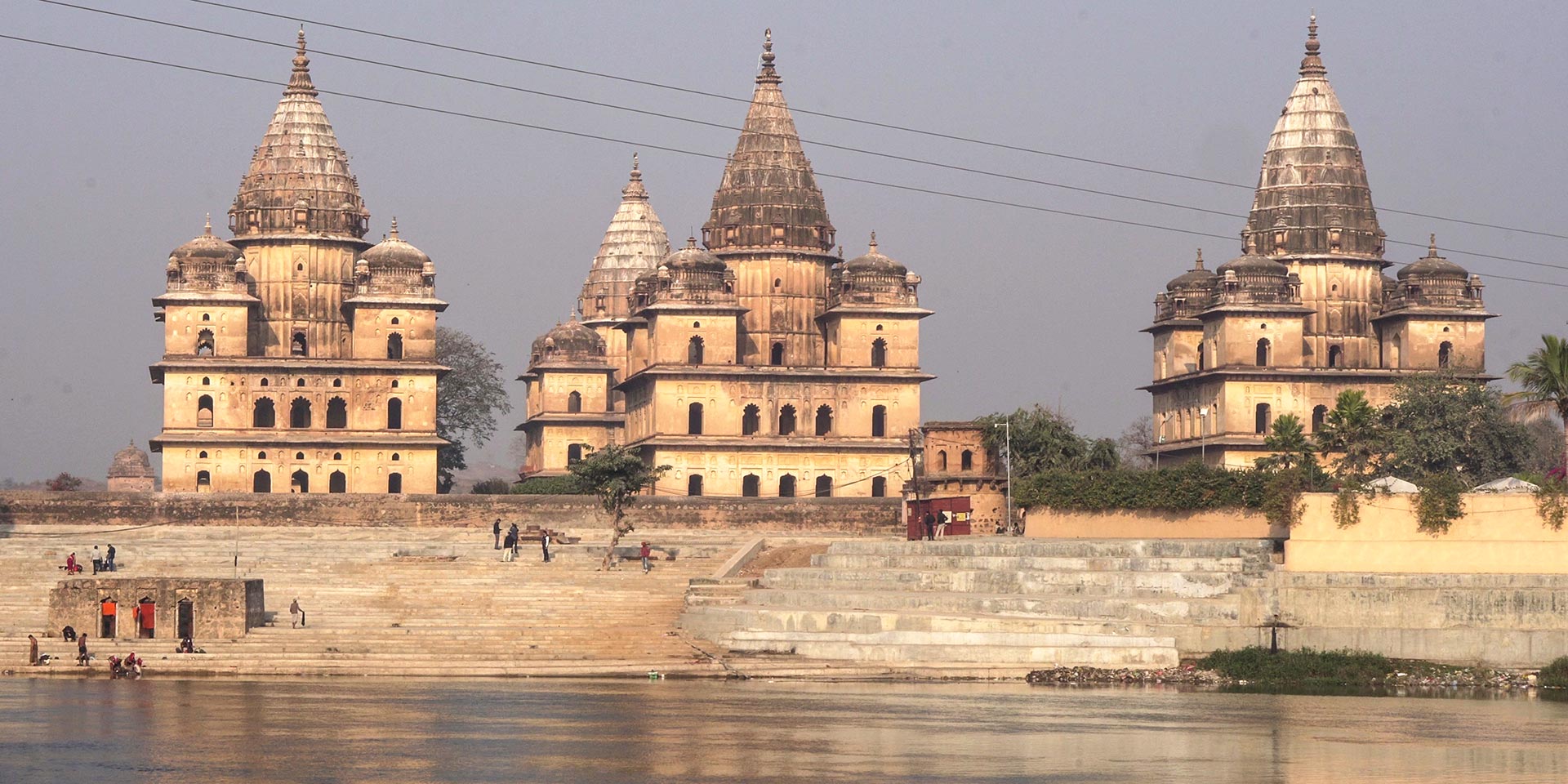 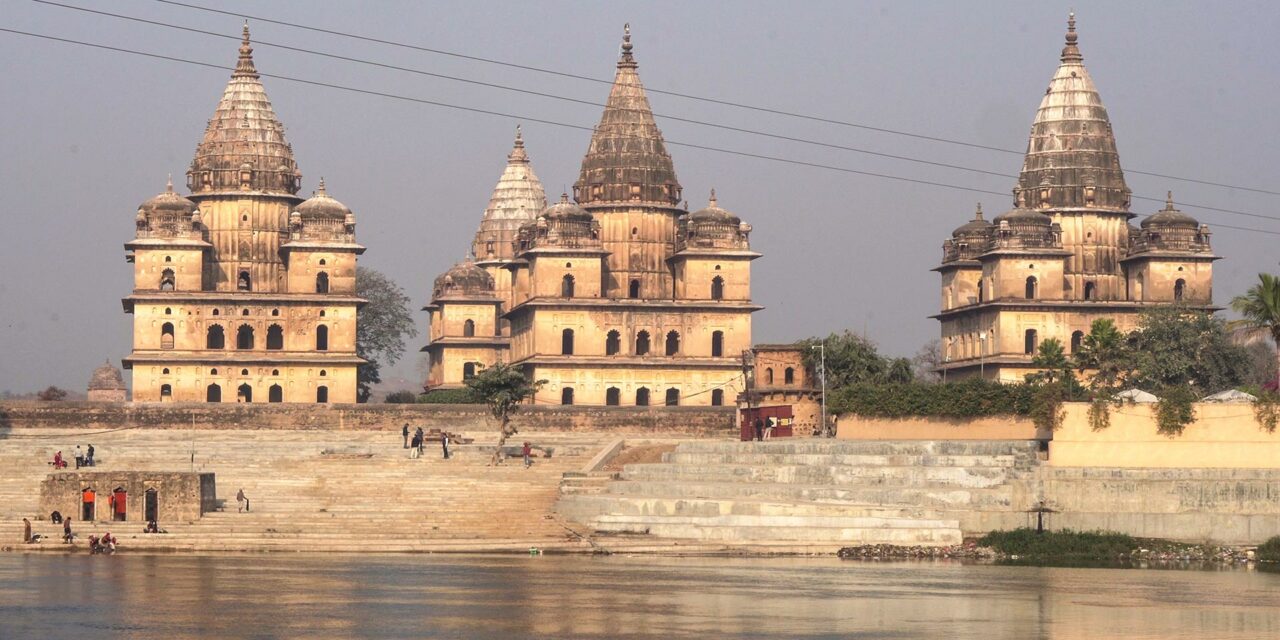 “When Generosity and Greed set out to visit [Orccha], they saw a huge array of forts, towns, and villages – how could I possibly recount all their names.” These words were written by scholar and poet Keshavdas in the 16th century, a time of the great Rudra Pratap Singh, King of Orchha. The economic and political majesty are now gone. What remains is a forgotten medieval capital in the heart of India’s Madhya Pradesh. A small town, scattered chhatris, and a towering fortress complex are Orchha’s legacy. It is in that hollow reverence that Orchha is so unique. As Keshavdas said of a lake, “It is marvelous, clear, vast, and profound in its depths.”

These days, travelers can stay in the fortress of Orchha itself if booked in advance; my journey there was somewhat more ad hoc. Arriving by train from Bhopal in the evening and staying overnight in an Orchha hotel, we woke at sunrise to see the chhatris on the Betwa River.

The first thing that struck me was the quiet. Beyond the occasional loud car, the chhatris stood tall and still against the sky.

If this were Rajasthan, I thought to myself, the stairs would be swarmed with tourists and touters. The Red Fort in Agra is inundated daily with thousands of selfie snapping tourists. But, in Orchha, there stood a line of delicately designed chhatris with only the company afforded by people bathing and praying in the shadow of these medieval wonders.

3 Royally Luxurious Palaces You Can Stay at in India

Leopards and Luxury at Sujan Juwai

Outside the quiet, empty fort is a different world – a more colorful Orchha.

These chhatris, I would come to learn, were little wonders compared to the coming Jahangir Mahal and Raja Mahal.

Started by a Bundela chief in the early 16th century, most of Orchha’s architectural magnificence comes after the Mughal invasions. Of those buildings, none is more impressive than the Jahangir Mahal, built by King Vir Sing for the Mughal prince Salim, known as Jahangir.

Much of the wonders of India are no longer off the beaten track. This is. Found in a small town, this fortress for kings is not often visited by foreigners. The halls, rooms, and stone balustrade-laden staircases, are all quiet.

For a photographer or videographer obsessed with geometry, Orchha is a goldmine. Despite the age of the Orchha temples, chhatris, and fortresses, it did not appear to be in disrepair – even compared to some of India’s more popular architectural wonders farther west. The paintings on the interiors were vivid, the stones worn but sharp.

The Orchha fort complex also features the Raj Mahal, the King’s Palace. Here, travelers and photographers will find the most impressive paintings and carvings on the ceilings and walls.

The realm of Lord Rama, the deity of Madhukar Shah’s wife, this area of the complex is also home to the Chaturburj temple, and there are even, supposedly, quite a few secret passages. The 105-meter-high Chaturburj temple – found on the outskirts of the fortress complex – was originally built to Rama, but it is currently worshiped for Radha Krishna.

Celebrating Dev Deepawali And Other Gems Of Madhya Pradesh

Outside the quiet, empty fort is a different world – a more colorful Orchha. The town around Orchha may not be very big, but it is lively.

The market was an active area with much going on, rows of tables kitted out with trinkets and necessities for the local and the occasional tourist. Hindu pilgrims were seen, and, of course, one will find the ever photogenic sadhus ready to have their photos taken – for a price.

It was further into the town that I was able to find a few musical and dance performances, some religious, some ceremonial. At one, people sat on the ground carefully singing hymns to a keyboard instrument worn brown with time and earth.

At another dance performance, young and old women with henna on their hands danced together quickly and with intensity. One woman was so overcome that she briefly passed out, caught by man dancing with the ladies. Spectators looked on clapping along with the music.

Brief as it was, my journey through Orchha was a memorable one – a region filled with the history of the Mughals and abiding religious architecture, yet maintaining the charm of a small India city. Having traveled extensively throughout India, it was a pleasure to see a fortress complex so large and intricate that hadn’t been taken over by travelers. Perhaps there are more to come.