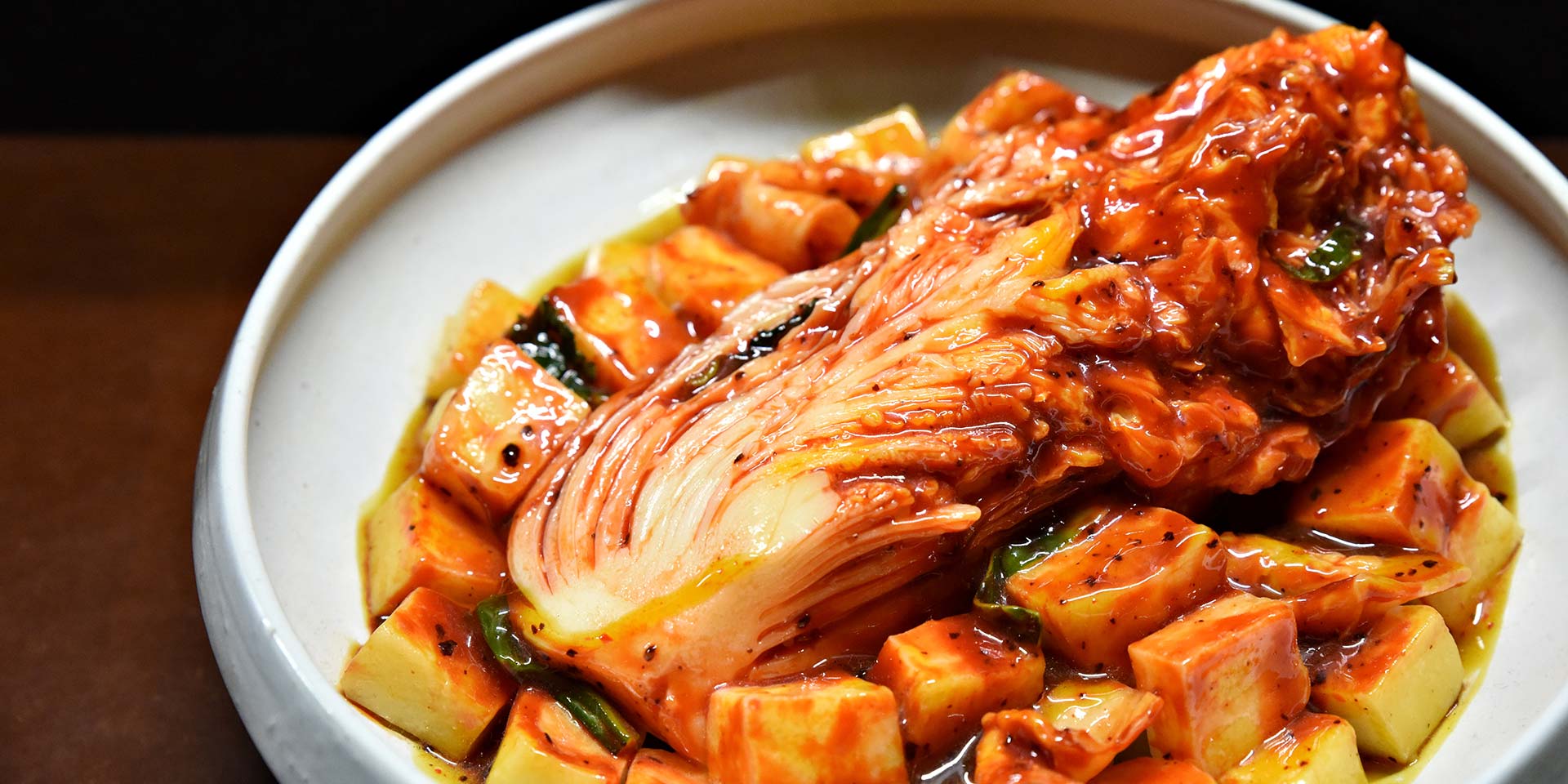 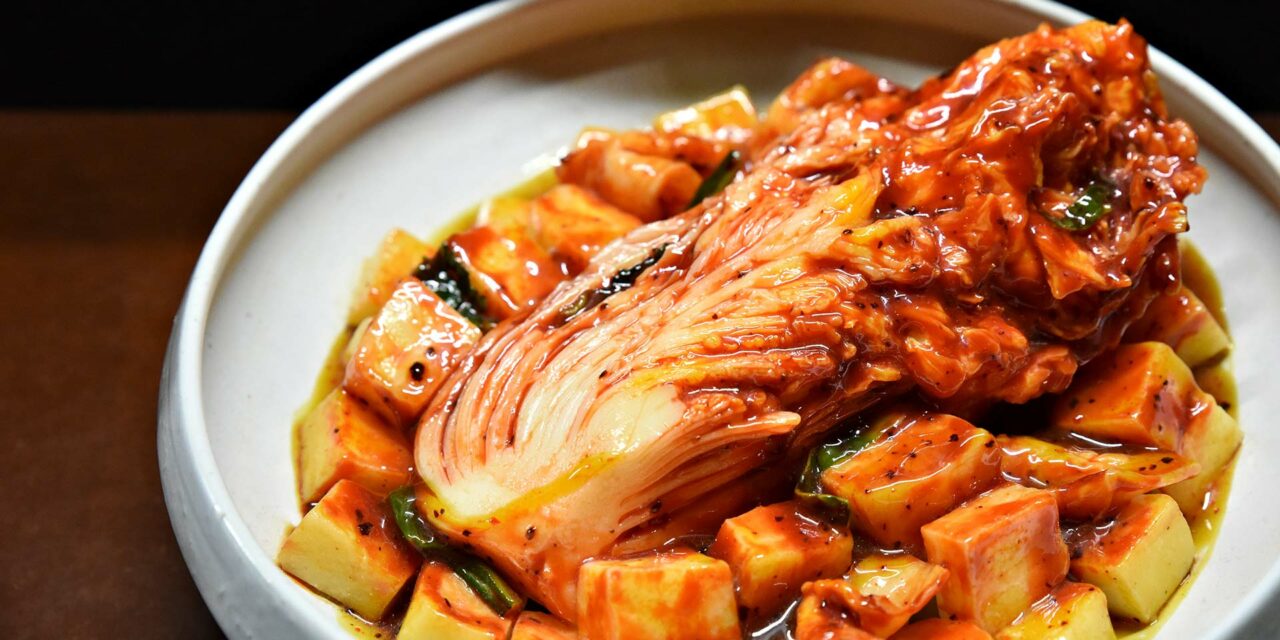 It is a simple food yet one which stirs a remarkable amount of passion and pride among South Koreans. So beloved is kimchi in this nation that it’s inspired songs, paintings, stamps, poems, and major events, with more than 3,000 people gathering in Seoul each year to cook this fermented vegetable dish together as part of the city’s annual Kimchi Festival.

There is even a large, modern museum in downtown Seoul dedicated solely to kimchi. However, shockingly to many who visit this museum, it is claimed that Korea’s neighbor across the Yellow Sea birthed Korea’s national dish some 3,000 years ago.

ABOVE: Kimchi festival in Seoul

Kimchi, to the uninitiated, is sliced vegetables seasoned with garlic, onion, and red pepper before being placed inside large clay pots to ferment, a process which lasts about a month. That’s a lot of effort just to make a side dish.

The iconic version of kimchi – the one most widely available around the world – is a spicy, red-tinged fermented cabbage version which is heavy (very heavy) on the garlic. Called Baechu kimchi, it is typically served as a side dish alongside main Korean courses. But there are more than 200 different varieties of kimchi. Some include fish or meat, while others feature ingredients like radish, Korean pear, persimmon, mushroom, or even mustard leaves.

ABOVE: Making kimchi at the Kimchi Festival

Travelers to Korea will notice the process of fermenting kimchi nearly everywhere they go, from outside country homes to the traditional jars on the tops of skyscrapers. Koreans are prepared to complete this laborious process not just because the result is delicious, but also because of the supposed health benefits of kimchi.

In Korea kimchi is widely considered to have tremendous nutritional value, apparently aiding digestion and boosting the immune system – some even spuriously believe it can prevent cancer. Koreans love this dish so much that they eat about 40 pounds of kimchi per person per year.

ABOVE: Traditional Kimchi Jar Storage Hut, Korean Folk Village in the city of Yongin, a satellite city in the Seoul Metropolitan Area.

But who was it that first began fermenting vegetables in this manner? Korea or China? China has been responsible for many of the world’s greatest inventions: the compass, gunpowder, paper, printing, and more. However, China has also earned a reputation for dubiously laying claim to having invented pretty much everything – a great way to wiggle money out of tourism bureau budgets.

But even in Korea’s Kimchi Museum, they give credit to the creation of the dish to China. The sign in the museum reads: “The earliest record of salted vegetable, which is the origin of kimchi, was found in a Chinese ancient literature, The Book of Odes”. In this collection of Chinese poetry, from the 11th to 7th centuries BCE, is the first recorded reference to “jeo”, the Chinese character for salted vegetable.

Seoul’s Kimchi Museum awards all the kudos for creating this to the Chinese. But the museum’s curators are quick to make a clear distinction between what the Chinese birthed and the more complex and flavorful version of kimchi that has become popular across the world. This latter style, they argue, was the work of Koreans.

ABOVE: Kimchi in the making.

Korean historians say that kimchi began in their nation due to the need to preserve vegetables during the country’s harsh winters. More than 2,000 years ago, Koreans were fermenting cucumber in large jars. Next they began eating fermented radishes before, during the Three Kingdoms period (57 BCE – 668), cabbage became a popular version.

Tar She Blows: Whale Watching Season in Tailand Kicks Off

It is also during this period that the first records have been found of Koreans cultivating gochu, the Korean form of chilli pepper. Over the following centuries these peppers became key to kimchi and these days it is hard to imagine the dish without its spicy edge. During the Goryeo Period (918 –1392) Koreans began to experiment with a variety of new flavours and ingredients, turning kimchi into a complex dish.

This kimchi – the nuanced version with endless varieties – is the one which Koreans claim to have invented. The original style – basic fermented vegetables – is what is being credited to China. So if China did technically invent kimchi, then it is undoubtedly the Koreans who perfected it.

If one travels about Seoul or Busan claiming that the national dish is Chinese, you’ll likely get more than a few looks askance. But, in fact, much of the kimchi currently exported around the world largely comes from China, not Korea. Moreover, much of the kimchi eaten on Korean tables is made in China too. And when China tried to boycott kimchi in the 2017 THAAD missile protests, they found themselves boycotting a product that hadn’t been imported from Korea in half a decade. The fact is that in the modern day and in the ancient days of the Three Kingdoms, food does not care about borders.