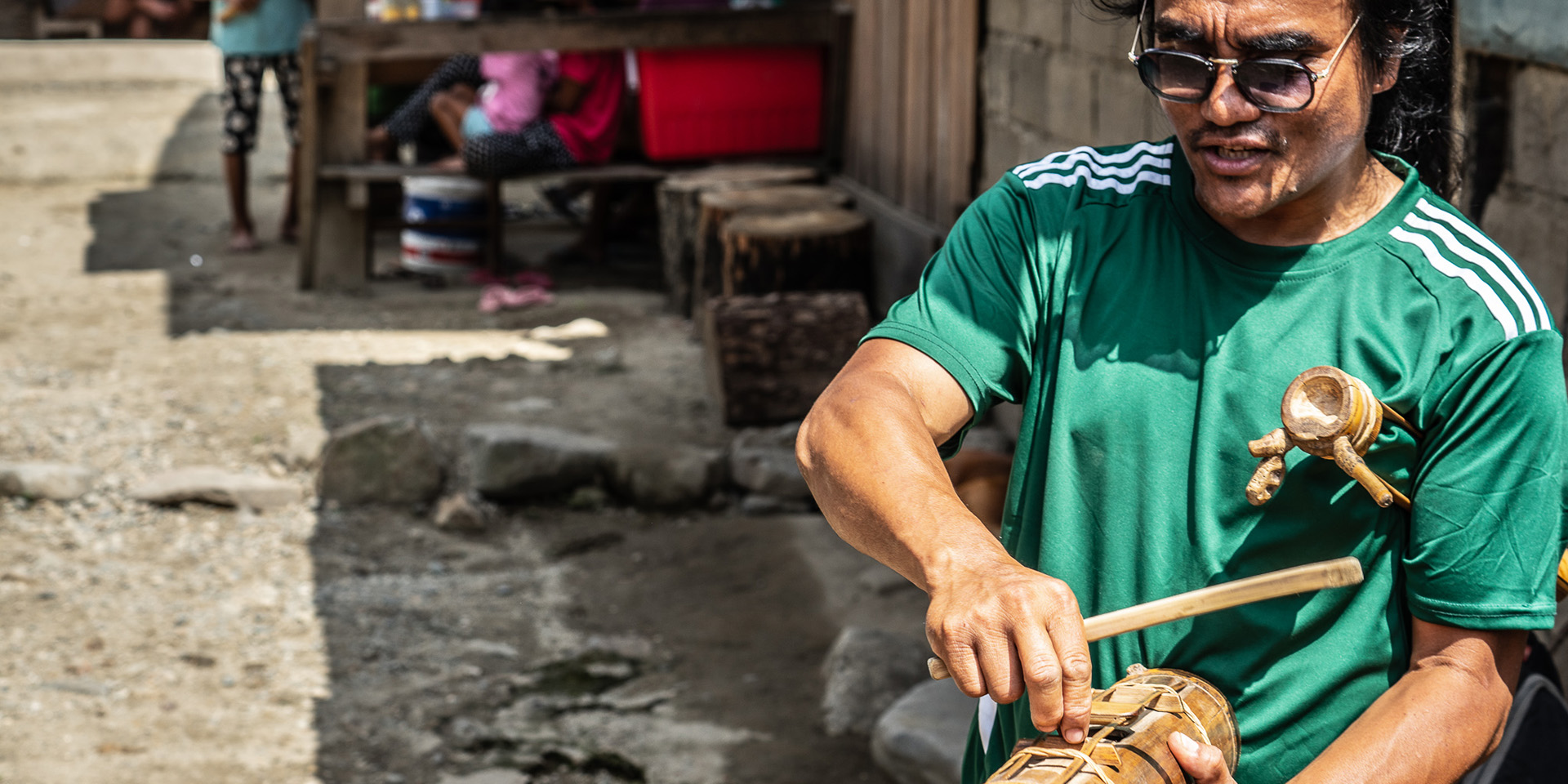 The rain was hurtling down the mountains. A makeshift tarpaulin stopped the worst of the downpour from drenching me, as I clung onto the back of the pick up truck as it slowly, pushed its way along the dirt track. It was still pitch black at 5am, but on one side of the road I knew there was a long drop into the valley below, while on the other side, I hoped the rocks high above would not be disturbed by the heavy rain.

I braved these rough roads, tropical rains, and potential landslides because in the remote mountains of the northern Philippines I was hoping to find the last bamboo musician in Abra.

Abra is a raw and wild province. This is the remote interior of Luzon, an area of tall mountains and isolated indigenous communities. This place was never conquered by the Spanish, and that for centuries kept out colonisers, missionaries, and invaders.

In more recent decades, Abra was the scene of a fierce communist insurgency, and even today the landscapes, while undeniably beautiful, provide the perfect terrain for guerilla groups that have never surrendered to the government.

Abra’s isolation has also ensured that the province has become an important holdout for indigenous cultures. In the provincial capital, Bangued, I’d heard rumours of a bamboo musician stalwartly crafting and playing instruments in the mountains — the last of his kind in Abra.

ABOVE: On a truck hood in Luzon.

Famed across Abra for his music, the bamboo musician was keeping local creative traditions, and local music alive. This bamboo musician was notoriously elusive, however, preferring a quiet rural life, to fame in the city. But being the last musician left who could truly craft instruments from bamboo, in a manner that the indigenous Tinguian people have practised for centuries, I was determined to find him.

A Journey Into the Mountains

Binondo: A Culinary Journey Through The World’s Oldest Chinatown

From start to end, it was a mere 50 miles from Bangued to Malibcong, the village where I hoped to find Abra’s last bamboo musician. The lashing rain was churning the rocky, dusty road to mud, but as with anywhere in the tropics, the rain was fierce but brief.

As the sun rose, the light burst through the mountains, and the rolling hills were illuminated in the early morning haze. The rain stopped, but there were rock falls everywhere. The mud soon hardened, and before long I was covered in layer upon layer of sticky dust as the pick up truck made its slow progress through the mountains.

50 miles turned into a painful five hour journey. In places, the road fell sharply away, revealing the devastation of huge landslides that had at some point in the year hurtled furiously down the slopes.

Huge trucks, precariously laden with people and goods edged along the narrow dirt tracks when another vehicle arrived head on. On queue, every hour my driver pulled over, and left the smoking engine of the truck to cool off as we struggled uphill.

And, assuming that the pick up could complete this journey, there was no guarantee that the bamboo musician would even be in his village.

ABOVE: Elmer Tadeo, the last bamboo musician of Abra.

In the bottom of a valley, a rustic collection of houses were strung out along the road. This was Malibcong. Aching and covered in dust and sweat from the intense journey, I slowly climbed out of the truck.

A man was standing in the shade of a doorway, dark sunglasses covering his eyes and long hair tied back in a knot, while an inquisitive group of villagers gathered around. He was holding a rustic yet undeniably refined instrument in one hand. I had found the bamboo musician.

“Come inside and have some coffee,” he said simply. “I heard that I might be having visitors”. Word spreads quickly in the mountains, even if the transport is slow, and Elmer Tadeo had already ground fresh coffee and readied his vast collection of bamboo instruments to play in anticipation of my arrival.

ABOVE: Elmer plays the nose flute, traditionally meant for meditation.

Elmer knew the remedies for a rough journey, and as I sipped on hot coffee, he began to play his trademark nose flute, an instrument that he’d painstakingly carved himself by hand.

“The nose flute is traditionally meant for meditation,” Elmer explained after playing a few gentle melodies. “Although it’s also meant for alluring the ladies too,” he adds slyly.

Elmer can craft 11 different types of bamboo instruments. Each of these evolved with a traditional, practical function in Tinguian culture. There’s a bamboo scraper which mimics the sound of a frog, while a bamboo clacker was used in the fields to scare away crows. There are wind and percussion instruments, and some are played in times of peace, while others are meant for war.

Elmer was playing on his own, but these bamboo instruments are really meant to be played in groups. Unfortunately though, Elmer laments that he is one of the only people in Abra who can still play them, let alone make them.

“I learnt to craft bamboo from my father,” Elmer tells me. “The history of bamboo musicians comes from planting. My ancestors used bamboo tools to cultivate the land, and they used bamboo to make music too. The culture is vanishing though.

Elmer is so elusive because he spends his time travelling from village to village, imparting the knowledge of his ancestors onto the next generation. At least, where he can. “I’m not supported by the government as a cultural worker though. It’s hard to get funding from anyone”.

Even at festivals, Elmer says that they prefer to bring in pop stars from Manila, rather than supporting local artists. For his generation, there was no focus on music, culture and Tinguian traditions, and the indigenous cultures of Abra have begun to suffer the loss of their heritage.

Elmer is trying to turn things around, and the fact that several music videos he’s made have tens of thousands of views on YouTube, shows that it’s far from a lost cause.

“I teach the kids the importance of culture. If you lose the culture then you will lose your indigenous identity,” Elmer tells me after playing more melodies, switching seamlessly from nose flute, to guitar, to percussion. “I tell them to value and treasure the importance of the instrument, as it’s part of life. From birth to death there’s always music and this music should always be treasured. This is the most important part of our culture”.

It’s a long process. After cutting the best bamboo, Elmer dries the cuts for 6 months, before he can begin work on fashioning his instruments. From the field, to being played, it can take him up to a year to fully craft a bamboo instrument, such is his dedication to fine tuning each individual instrument to achieve the best notes.

Along with his guitar, Elmer has been making a name for himself in Abra, as he fuses traditional bamboo music with modern sounds to capture the attention of the next generation of musicians. The problem, as Elmer puts it though, is that no matter how many people are interested in seeing the culture, what he really needs is for those people to be interested in learning how to not only play the instruments, but to craft them too. Or else, the bamboo music might well fade forever.

Hearing the sounds of Elmer’s music, a crowd had gathered around his home by the time it came for me to leave, listening to the melodies and tunes of their ancestors.

Climbing into the pick up truck again, I readied myself both physically and mentally for the long way back, the sounds of the last bamboo musician of Abra following me through the village as my journey began.