Go to an akhara, a traditional wrestling gym limited to men only. They are so popular today that most men in Varanasi still visit an akhara rather than a modern gym.

See Indian fine art at the Bharat Kala Bhavan, an art and architecture museum located in Banara Hindu University. Established in 1920, the museum houses a collection of Buddhist and Hindu sculptures and paintings and other archaeological artifacts.

Late October is the best time to go to Varanasi as this is when Diwali, the “Festival of Light,” occurs. Celebrated by Hindus, Jains and Sikhs, Diwali marks the victory of good over evil and the return of good will and faith.

Experience dawn on the Ganges, an unforgettable sight. Take a private boat from Dashashvamedha ghat, one of the most spectacular of these famous stairs that lead to the river’s edge, to Manikarnika ghat. Hindu lore tells that Vishwanath Temple, located at Dashashvamedha ghat, was created by Lord Brahma in order to welcome Lord Shiva.

Visit Jnana-Pravaha, a cultural institute based in Varanasi which houses Indian scion Suresh Neotia’s collection of Indian fine art. Jnana-Pravaha aims to promote and disseminate information on Indian culture through academic workshops, lectures and the presentation of varied forms of visual and performing arts.

Drive to a scenic ghat on the Ganges and witness a puja at dusk. A puja is a religious rite performed by Hindus, although it is also common in Buddhism and Jainism. The ritual is a daily reminder of the link between the earthly and celestial worlds.

Visit Ramnagar Fort, a red standstone structure built in the 18th century, for a spectacular staging of the Ramayana, the Hindu epic centered around the avatar Rama, his lover Seeta, the faithful monkey-god Hanuman, and the evil king Ravana. Meet the actors of this well-known story, and watch them get into costume and make up for tonight’s performance.

The Fort also has a temple and a museum within the grounds. The museum displays include vintage cars, an armory of swords and old guns, ivory work and antique clocks.

Visit HM Textiles located near Dulli Gaddi near the Yamuna Talkies, and Silkways located behind Hotel Clarks, to buy some locally spun silk. Supposedly even Buddha was covered in silk from Varanasi (then called Benares) when he attained nirvana. Some of the stores even have silk looms in the back where you can see cloth being made via an antiquated punch-card system.

Explore Vishwanath Gali, a triangular labyrinth of shops and religious sites in the center of Varanasi. Backpackers and long-term Varanasi residents alike wander through here, eating at chaat, or snack stands, and buying bangles, toys, trinkets, pieces for altars in the home, and other sundries. 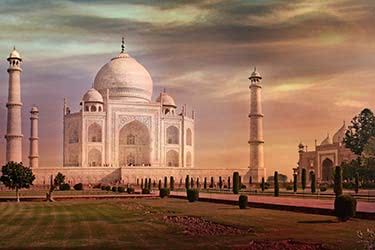 Step inside an age-old culture and explore its beauty on this 14-day journey that takes you through bustling New Delhi’s Chandni Chowk Market, to the steps of the iconic Taj Mahal, and over to the banks of the Ganges to observe the sunset Aarti, all while staying at some of the country’s most luxurious hotels. 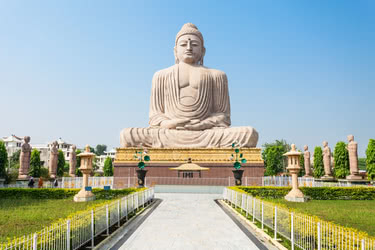 Following Buddha's Footsteps Across the Himalayas

This 19-day itinerary promises to immerse you deep into the local culture and religious beliefs throughout the Himalayas by exploring beautiful ancient religious monuments and sacred sites of worship. Follow in the footsteps of the revered Buddha, from his birthplace, to where he was believed to have gained enlightenment, and the site of his death. 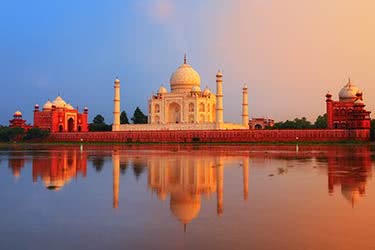 Travel for 10 luxurious days through North India, taking in the region’s incredible sights and landmarks. You’ll visit New Delhi’s Qutub Minar, India’s tallest minaret, catch the sunrise over Taj Mahal in Agra, and go on safari rides in Panna National Park, while staying in some of India’s most luxury hotels.

Following Buddha's Footsteps Across the Himalayas

This 19-day itinerary promises to immerse you deep into the local culture and religious beliefs throughout the Himalayas by exploring beautiful ancient religious monuments and sacred sites of worship. Follow in the footsteps of the revered Buddha, from his birthplace, to where he was believed to have gained enlightenment, and the site of his death. 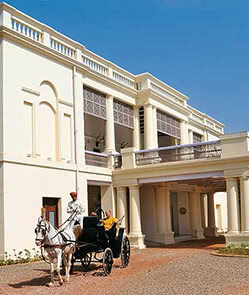 The Nadesar Palace lies nestled in the heart of vibrant Varanasi among mango orchards, marigold and jasmine fields. Built by the East India Company and acquired by Maharaja Prabhu Narain Singh in the 19th century, the property is named after goddess Nadesari, whose shrine is located in front of the palace. All accommodation at the boutique yet opulent Nadesar Palace, which includes just 10 luxuriously appointed Heritage Rooms, Heritage Suites and Royal Suites, is generously scaled with large windows overlooking the gardens and spacious bathrooms in cool white marble. There is a restaurant serving local cuisine and satvik fare, which is said to bring calmness, intelligence, strength, health, happiness and longevity. Fresh fruits and vegetables, cereals and grains form the main ingredients of satvik food. The grounds are just 13 miles from Varanasi’s airport (VNS). 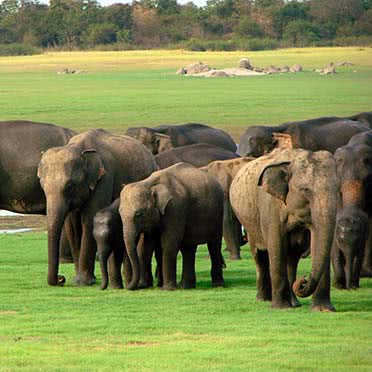 The Rites of Cremation at Kathmandu’s Pashupatinath Temple

The most important temple complex in Nepal, Shree Pashupatinath is a maze of cultural treasures; most know it as where the bodies of Kathmandu burn.

Lens on Sadhus from Kathmandu to Varanasi

Jay Tindall has been shooting sadhus for more than two decades; down his lens, the varied faces of the holy men of Nepal and India tell tales.

The Forgotten Gujarat Town of Sidhpur

The lonely town of Sidhpur in Gujarat is a mix of architecture, culture, and mythology, from the great warrior Parasurama to colonial corners built by merchants.

Luxury Guide to India Festivals in 2019

Seeing the festivals of India isn't difficult if you get a flight and a car, but to see it in style takes a little Remote Lands know-how. This luxury guide to India festivals will put you on the right track.

This year has gotten off to a roaring start, with our favorite picks from the first month of 2018 including monkeys from India, stormy skies in Weligama, and beaches in the Philippines.

Varanasi: The Tale that the River Told

Varanasi is a shock to the senses, and is pure India at “full speed ahead” mode. It is crowded, dirty, bizarre and 100 other adjectives.