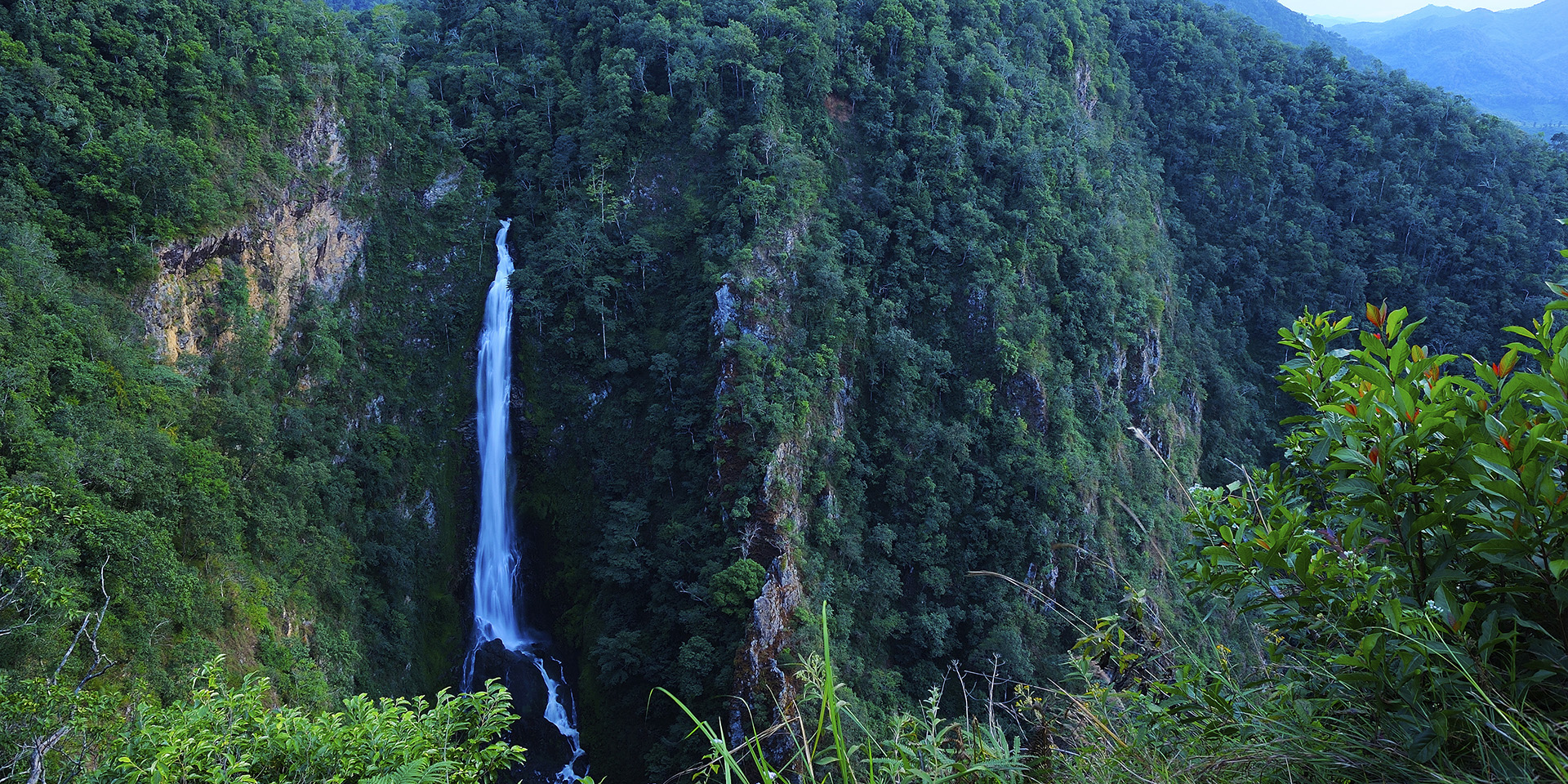 Having toured northwest Thailand by motorcycle for over 15 years now, I’ve been to most of the superlatives in the region. The largest waterfall in Umphang, highest peak at Doi Inthanon, furthest points west, east, and north but I had never been to Surin waterfall: the highest single tier waterfall, little-visited, difficult to access.

The Mae Nam Tok Surin (Surin waterfall) national park is in the Khun Yuam district of the Mae Hong Son province off the 4009 highway, an older rural, alternative to highway 1263 – famed for Thailand’s Chiang Mai to Mae Hong Son loop. I arrived in the area after two long days of riding around 1,200 kilometers through the curvaceous mountain roads that crisscross the north west of the country in clear, cool weather under sunny blue skies.

Just before reaching the park though there is another natural attraction, Ban Bue Tong, the wild sunflower fields. For two weeks a year the valley below Doi Mae U-Kur, the province’s highest point at 1,873 meters, erupts in a sea of gold as millions of Mexican sunflowers (TIthonia Diversifolia) come into bloom. Cars line the sides of the road as couples and parents with children in tow wander along paths cut through the forest of flowers, taking selfies at pleasing vantage points.

At that high elevation, evergreen trees grow along the mountain ridges and with the expanse of bright yellow wild flowers and a bustling trade in strawberries happening it’s a landscape reminiscent of Europe or North America; it seems a long way from the steaming jungle or white sandy beaches that are more common for Thailand travelers.

After Passing through scenes from a previous century with people in their fields post-harvest alongside buffalo grazing on chaff for a further 15 kilometers, I arrived at the park to an empty guards’ booth. The staff sat nearby in a group shucking corn and talking in the Karen language. Greetings were made all around before the headman and I sorted out the particulars, I paid my fees and he lent me a sleeping bag before I went off to find the perfect spot to hang my hammock.

ABOVE: On the road to Mae Hong Son.

The staff spoke Thai with heavy accents and only conversed in Karen among themselves – no English here. That and the slightly run down state of the old buildings on the grounds was evidence that they received few visitors. On my arrival there was only one other couple.

The park’s camping area occupies a steep slope so that tent spots are built up level and flat but the hammock can be strung anywhere. I found the right spot at a sala built just at the cliff’s edge.

Across the valley the waterfall’s single cascade spurts from the deep ‘V’ its endless flow cut into the mountain and then falls 200 meters. The rumble of the water echoed from the rock faces of the surrounding hills that stretch to the jagged horizon.

ABOVE: Huay Pa Pae at sunset.

The park’s humble restaurant had little more to offer then dried noodles but the three young sisters who run the concession took pity on me and shared a curious curry they made for their own dinner. The guards told me about a local guide who would take me to the bottom of the falls in the morning, but it was a long way down. One thought it was an hour, the other that it was five kilometers. None had ever been.

It was a cloudless, new moon night. With no electric light around for dozens of kilometers, there was near zero light pollution. The stars hung over my hammock so clearly and densely stippled in the absolute darkness I felt I could swipe my hand through them. The waterfall boomed through the night like nature’s own white noise machine as I fell in and out of sleep, fighting off the chill of altitude and the cold season.

ABOVE: Hammock for a night with Mae Surin.

Taking A Royal Enfield Across the Mongolian Steppes

In the morning I found Garlop, my guide, with his lovely young wife and burbbling infant daughter waiting for me at the tiny homestay they run on the slopes of the mountain. They had even saved some of the family breakfast of rice soup and bananas, knowing there was little to eat at the park. Like most Karen men he was short and lean and in his knee high gumboots as sure footed as he was mountain born.

Garlop had hand cut the four- to six-inch wide trail we followed across the face of the steep, rocky mountain side. The trail failed in places, washed out by the year’s heavy rains, requiring leaps across those gaps in loose scree using branches, roots, or any other vegetation along the way. It was tough going down, but the thought of climbing back out was more daunting.

In order to cross the single pole bamboo bridge that crossed the river at a rapids, Garlop suggested we take off our shoes for the footing. The rocks and boulders that make up the river bed are sharp-edged, recent debris from the cliff face, making the last stretch of the hike a careful and slowly-paced maneuvering. The crash of the water made conversation impossible.

The late morning sun was just breaching the peak of the valley as we arrived at the base of the waterfall, casting strong light onto the flow which sparkled in the sun against the black rock face and dense jungle in the background. Where we stood calf deep the water was almost numbingly cold, clear as gin as it tumbled through the boulder strewn basin of the falls. I could have spent hours exploring the area and watching the water, but Garlop was on the clock so after a respectable time he let me know it was time to make our way back.

ABOVE: Thailand’s highest waterfall from the bottom.

The trail is a bit less than two kilometers; it took just under an hour to descend and over two to hike out despite the vigorous pace set by the sure-footed Garlop. At times when I stopped to ease the burning in my calves from climbing the almost vertical stretches Garlop would skid off the trail to cut some bamboo to bring home and make into coffee cups for his homestay.

When the forest opened into a neighbor’s field, finding that neighbor repairing a fence he had surrounding his corn. Wild pigs came at night and tore through it in their hunger to get at his crops and he vowed to barbeque them if they came back.

I was back on the road by noon. There were more mountains to wind through and new roads to find like the 106 from Chang Tong to Li, which had a stretch of S turns so long it seemed that the engineers in charge of its planning had devised it with nothing but the elation of motorcyclists in mind.

ABOVE: Thap Salo in Uthai Thani.

Ride on the Wild Side: Motorcycling Along Vietnam’s Historic Ho Chi Minh Trail

Two questions occured as soon as I began planning the trip; why are there two Mae Nam Surin National Parks and why are they both in Mae Hong Son, hundreds of kilometers from the province of the river’s name? One I may now understand.

The name Surin is derived from two Sanskrit words: sura meaning god and intar referring to Indra. The province of Surin in the extreme east of the country on the Cambodian boarder got its name from Luang Surin Phakdi, the official title of its royal governor in 1786 but how did a fairly small and unimportant river in the extreme west also get that name?

On what should have been the last day riding, a quick detour to Sai Bor waterfall in Uthai Thani province for a dip in the creek became a night’s stay as the temptation of hanging the hammock up on the banks of the cool water was too tempting to forego. Sai Bor waterfall is a perfect spot for a swim. The water slides down 25 or 30 meters on a smooth rock face before gently plunging into a deep, clear pool with a soft sandy bottom. So different from where I had been a couple of days before, it occurred to me perhaps that was how Surin waterfall got its name. The god Indra is a guardian deity to Buddhists but the god of thunder, lightning, and river flows to Hindu’s, a fitting connection to the powerful, dark waters that fall at Nam Tok Surin.