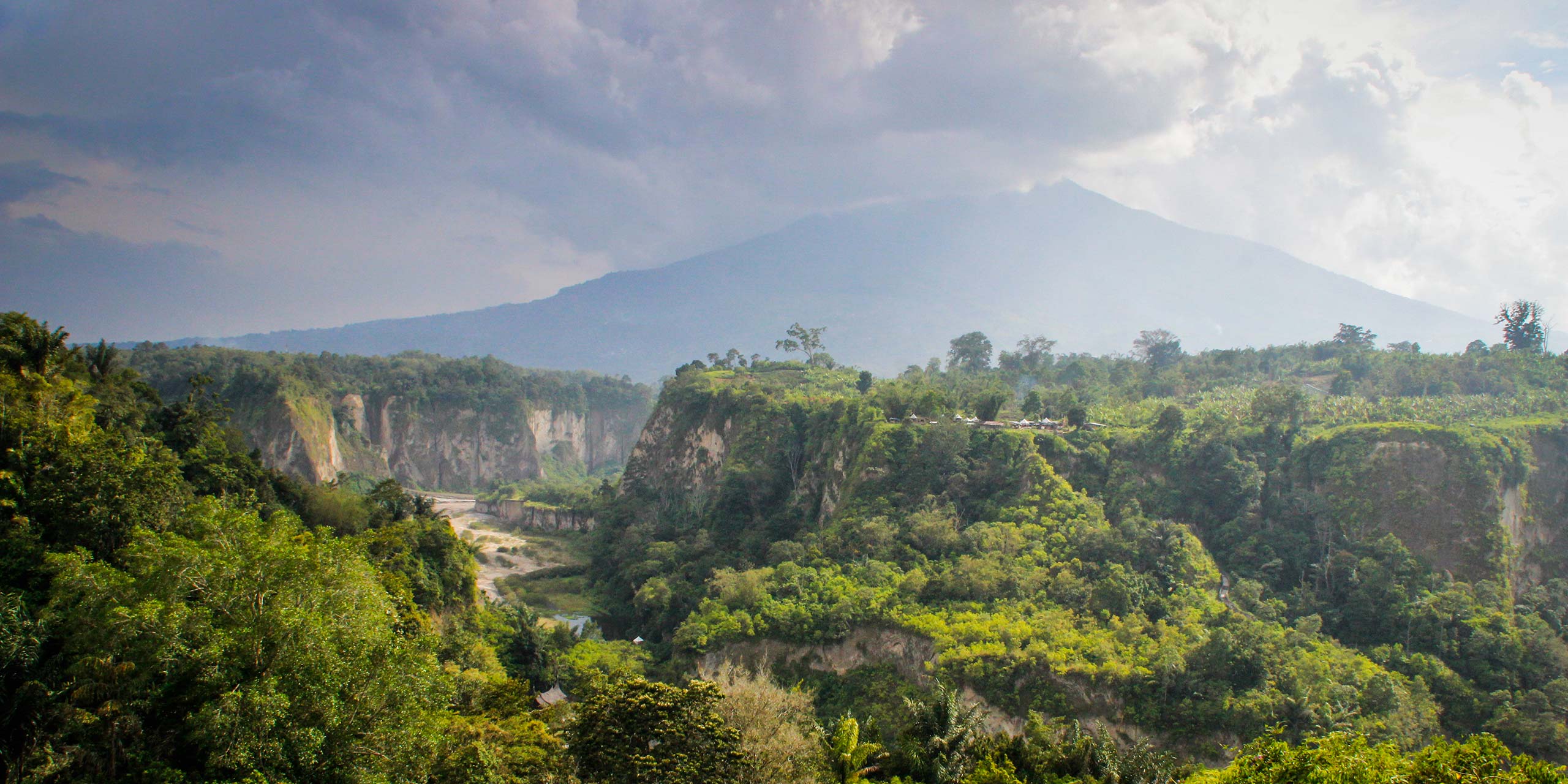 To prepare your legs for bigger challenges, the Great Wall of Koto Gadang on the outskirts of Bukittinggi fits the bill. With views of the green Sianok Valley, a scene totally unlike the craggy hills in northern China, this is a different “Great Wall” experience. Controversial local politician, Tifatul Sembiring, and the mayor of Bukittinggi came up with the idea of building this replica Great Wall of China and, like the original, it has some steep sections to test the legs. Sembiring achieved his infamy for, among other things, claiming that recent natural disasters, such as the 2009 earthquake in Sumatra, were caused by immorality in society.

Adding to the scenery of Sianok is a colony of crab-eating macaques. These omnivorous monkeys, with very expressive faces, are on the lookout for whatever food they can scavenge from visitors. They obviously don’t eat crabs here but they are called ‘crab-eating’ as members of the species who live closer to the coast do just that.

Sianok Valley is on the outskirts of Bukittinggi in the heart of West Sumatra, an Indonesian province with many opportunities for trekkers and wildlife enthusiasts. This part of Sumatra is easily accessed by flying into the provincial capital, Padang. The town of Bukittinggi is a good base for discovering the Minangkabau Highlands. The Minangkabau people are known for their matriarchal culture and beautiful rumah gadang – houses that have curved roofs resembling Buffalo horns. Buffalos are important animals in this culture, indeed the name Minangkabau itself means victorious buffalo. The people in this area are Muslim but preserve some of the adat, or traditions, of pre-Muslim times.

A Journey Into the Heart of Java

Overland Adventure through Flores to Komodo

The skyline of Bukittinggi is dominated by two of Sumatra’s great volcanoes, Marapi and Singgalang. Mount Marapi, not to be confused with the more well-known, Merapi, in Central Java Province, is the most active volcano in Sumatra. Marapi is an excellent all day hike and the views from the summit rival those of the higher Kerinci. It is a very popular place with Indonesian students on the weekend. The crater complex features deep smoking crevices (although this is a safe hike don’t get too close to the more active vents) and quiet canyons. Near the crater area is a concrete monument to a young Indonesian man who died at the summit in 1992. He was struck by a rock spewed out in a minor eruption. His name was, rather curiously, Abel Tasman, presumably after the Dutch explorer, the first European to reach New Zealand.

If you need protein and carbs after hiking, nasi padang should satisfy. This is Sumatra’s most famous export: plain rice served with a variety of fish, chicken, beef and vegetable dishes, complemented by spicy sambal sauce. For dessert street carts sell es cendol ampiang durian – a glass of this stuff contains sago (a starchy substance made from tropical palms), sticky rice, durian flesh, brown sugar and ice cubes. It is worth taking a relaxing day to see the sights of Bukittinggi starting at the central market to see the Jam Gadang, or big clock. This tower, originally built by the Dutch, was updated with a Minang style curved roof after Indonesian independence. Further up the hill is the colonial Fort de Kock linked to the Bukittinggi Zoo by the attractive Limpapeh Bridge.

Fifty kilometres from Bukittinggi, Harau Valley offers picturesque hikes through the rice paddies and jungle. Climbing the steep valley wall you can hear gibbons crashing through the canopy and see giant orb spiders weaving their webs. Also looking to trap insects are carnivorous pitcher plants, these trumpet shaped killers emit smells that attract bugs to land on their slippery bell. The unfortunate insects fall into the plant’s liquid depths to get slowly digested. Once at the top of the valley wall, great views of the patchwork of rice paddies in the valley below can be seen through several clearings up on the ridge line.

Lake Maninjau is another popular stop off in the Bukittinggi area. The road down to the lake has 44 switchbacks and is an adrenaline rush for cyclists. The mirror-like surface of Lake Maninjau features bamboo matrices floated by way of plastic barrels. Below are cages full of a fish called ikan nila, and these fish farms make the villages around the lake fairly prosperous. The people here turned to fish farming in a big way when tourist numbers dropped. I was told that I could buy one of these fish cages, or karamba and quickly make my money back. Another possibility is raising Buffalo, calves grow fast and don’t need too much grazing land. Once fully grown a buffalo can be sold at a nice profit.  It is always good to have backup plans, and these two business ideas may yet come in handy. In the villages of Maninjau, depending on the time of the year, local guides can be found to take you deep in the jungle to see the largest flower in the world, the Rafflesia arnoldii. This parasitic plant is also known as the corpse flower because of its rotten smell. The flower is named after the founder of Singapore, Sir Stamford Raffles, and naturalist James Arnold, who collected a sample. Raffles was in Sumatra in 1818 because in 1795 the British took the coast of West Sumatra from the Dutch, who were on the French side in the Napoleonic Wars. The Dutch came back in 1819.

Moving south from Bukittinggi, Mount Talang is another one of West Sumatra’s six active volcanoes. While Marapi is close to 2900 metres, Talang is around 2600. It is a hiking destination recommended for photographers because of the views of the beautiful twin lakes Dibawah and Diatas (literally the lake below and the lake above). Beyond these two lakes, to the south on the border with Jambi Province, the cone of Kerinci should be visible from the summit of Talang. At 3805 metres Kerinci is the highest volcano in Indonesia, the highest peak being the razor-like Puncak Jaya over in Papua Province. For such a high mountain, Kerinci is not a terribly difficult climb. Usually the hike takes two days, with one night spent at a shelter just above 3000 metres. The trail up the mountain begins with passing a prominent statue of a tiger and then a tea plantation that has been there since Dutch colonial times. Once in camp, it’s best to get to bed and then wake up super early to reach the small summit area at dawn before clouds block the view out across the Indian Ocean. The other peaks mentioned here are also visible to the north.

For cryptozoologists who look for species claimed to exist through anecdotal evidence only, Kerinci Seblat National Park has something special. The orang pendek is a legend that has endured for centuries. While orangutan means man of the forest, orang Pendek means short man, and this doesn’t refer to Homo sapiens but a bipedal ape that has been spotted wandering through the forest and even raiding crops. Perhaps the story exists so Kerinici can compete for visitors with the north of the island, home to the ever fascinating orangutans. Since orangutans have the ability to walk on two legs, orang pendek sightings might have been of an orangutan population now extinct.

Another theory is that the creature is not an ape at all but a kind of hominid, i.e. primitive man. Some parts of Kerinci are very remote and hard to access – this is the reason it has somewhat escaped logging and the Sumatran tiger has been able to survive there. The park has the largest population of Sumatran tigers on the island, with estimates being close to 200 animals. So, who knows, maybe the orang pendek really exists and is a species of ape yet to be categorised? More easily evident to the eye in Kerinci is the amazing birdlife. Out of many attractive species, the Sumatran trogon is a stand out. This bird is bright yellow and green, trogon is the Greek word for nibbling – and this bird pecks holes in trees to make room for its nest.

In the 60s and 70s Sumatra was firmly on the trail for tourists in Southeast Asia. However, with the advent of budget airlines making it easier to skip straight to Bali from Singapore, and Indonesia cutting the tourist visa from 60 to 30 days, numbers fell. The government has in recent years been pushing to get tourists to the island, especially Bukit Lawang (to see orangutans) and  Lake Toba, home to the Batak people who are largely Christians. Toba is one of the four key destinations that President Jokowi marked for development in 2019. While they are unlikely to meet their targets and Sumatra and will never be another Bali, it has a lot to offer. It is second in Indonesia to Kalimantan (Indonesian Borneo) in the size of its rainforest, but unlike Kalimantan it has volcanoes to hike and its infrastructure is only behind Java and Bali. 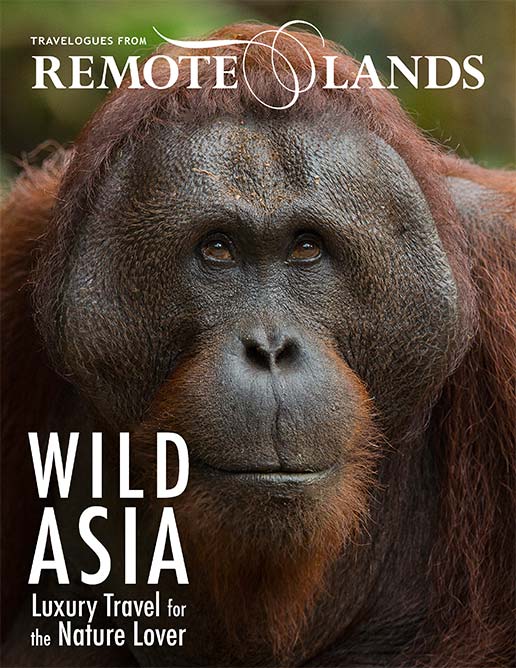