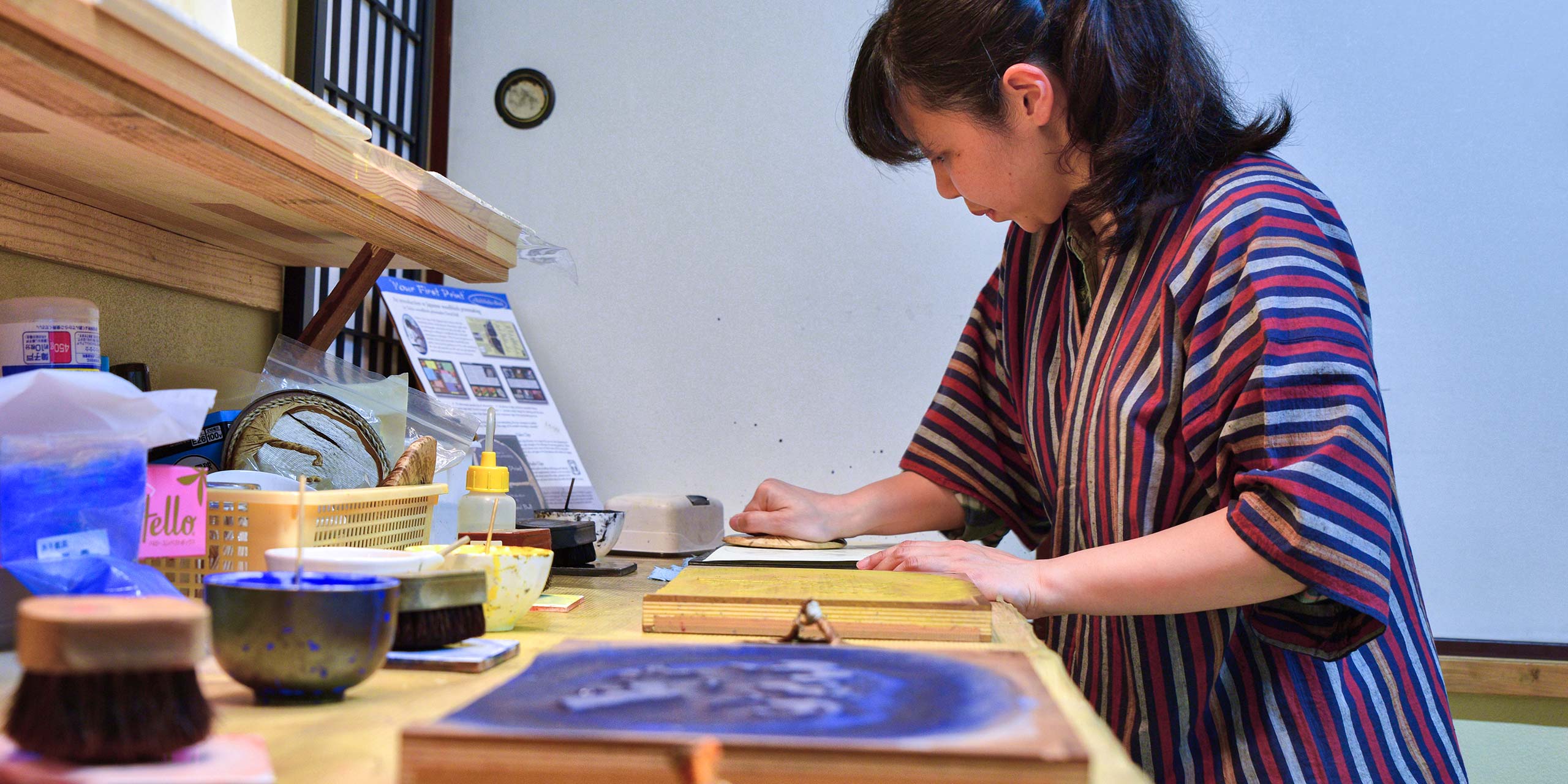 In studios across Japan, tourists are weaving, folding, stamping, and wrapping in the manner of ancient Japanese artisans. Western fascination with Japanese culture has inspired workshops across Japan teaching travelers the skills of traditional crafts like making Sumo hair ties, washi printing, woodblock art, cloth wrapping, and origami. These are not mere hobbies. They’re proud representations of an artistic culture that stretches back 3,000 years and is intertwined with religion and philosophy. Here are five Japanese art forms tourists can learn.

It was beloved by Emperors, popularized by a famous warrior, enchanted generations of Japanese children, and produced some of Japan’s greatest-ever artworks.

Yet the popularity of Mokuhanga woodblock printing nosedived in the 1900s. Now, this 1,300-year-old artform is experiencing a resurgence thanks, partly, to the passion of non-Japanese artists, including 70-year-old Tokyo-based Canadian David Bull, and the members of the International Mokuhanga Association.

It was Mokuhankan, Bull’s studio and shop in the Tokyo suburb Asakusa, where I learned the basics of this craft. Mokuhanga begins with the carving of images into the base of a block of wood. Water-based ink is then applied to this base, turning the block into a form of a stamp, which is pressed against paper, leaving behind a colorful depiction.

Because the carving had already been completed, my only task was rubbing the block in ink and stamping the paper. This I was capable of. The Karuizawa Mokuhanga School, in Kyoto, offers far more complex courses, which cover every part of the traditional Mokuhanga process.

Cut from the artistic cloth

Bath spread is an uninspiring name. Yet I derived a surprising amount of joy from folding these colorful pieces of cloth, also known as furoshiki, under the guidance of my sunny instructor Yuka. I was in Sakura, a Japanese culture workshop at Tokyo’s Shiba Park Hotel, which offers an array of artistic workshops to foreigners.

Dating back 1,300 years, furoshiki is a technique for folding a single cloth into a variety of shapes for a multitude of uses. With nimble fingers and a keen eye, you can make a carry bag for shopping, a decorative holder for a bottle of wine, pretty wrapping for a present, or a carry case for picnic items which then transforms into a rug.

Furoshiki has had a renaissance in recent years, Yuka told me, because it was perhaps the most practical of all ancient Japanese art forms. It offered a creative outlet that produced a functional object. With Japanese people increasingly rejecting plastic bags, furoshiki was a green alternative. After several experiments, some successful others not so much, I left the lesson with a gift box for my wife attractively cloaked in furoshiki.

The art of tying knots in a silk and rice paper cord, mizuhiki can complement furoshiki when decorating a present. It is a fiddly art best executed by people with fingers far shorter and thinner than mine, yet I did my best thanks, once again, to the guidance of Yuka inside the Sakura studio.

I aimed to make a rainbow-hued hairpin for my wife. First I gathered a cluster of long, narrow cords of varied colors. Next, I slowly weaved them together, creating a tight knot. This robustness was crucial, Yuka said, as the mizuhiki was intended to be a symbol of strength and resilience, which explains why it is favored by sumo and by Japan’s revered Samurai warriors before them. My wife was delighted with her gift, which was imbued with more than 500 years of artistic heritage.

Back in the fold

Similar to mizuhiki, my large hands and sausage-shaped fingers are ill-suited to the delicate maneuvers of origami. Within the first 20 minutes of my lesson in the Japanese art of paper folding, I had crumpled or torn every smooth piece of paper placed before me.

As opposed to mizukhiki and furoshiki, which aim to produce an item of utility, origami focuses on aesthetics, to create a beautiful two or three-dimensional shape. Some origami is so intricate they require hours of careful, slow folding by a master artist.

The designs I was trying to replicate were comparatively basic, yet still I struggled. My class took place in Tokyo, but there are dozens of cultural facilities across Japan that offer origami workshops for tourists, as it is perhaps the most globally famous of all Japanese crafts. Origami in Japan dates back at least to the 1400s, although some historians place its true origins in China, more than a millennia ago.

How can something tremendously fragile survive for 1,200 years? The answer is by balancing decoration with space, complexity with simplicity, and preserving techniques perfected by ancient artisans. Kyoto is Japan’s hub of historic art forms, so I went to its serene northern suburbs to meet Ko Kado, who painstakingly creates Karakami paper designs as if it were still the year 822AD.

Similar to Mokuhanga, Karakami artists create delicate washi paper, handmade from plant fibers, upon which they use carved woodblocks to print designs. The difference is that, where Mokuhanga creates individual art pieces, Karakami typically produces wallpaper, with panels decorating screens and interior walls of homes and temples.

Kado, who runs the Karakami shop Kamisoe, learned this trade at a Karakami studio that dates back centuries. Rather than using traditional designs, as is common in this art form, he creates his patterns and images which have a modern flourish. While Kado does not offer Karakami workshops, he happily gives tips to customers, who can attend classes in cities across Japan, including Kyoto.