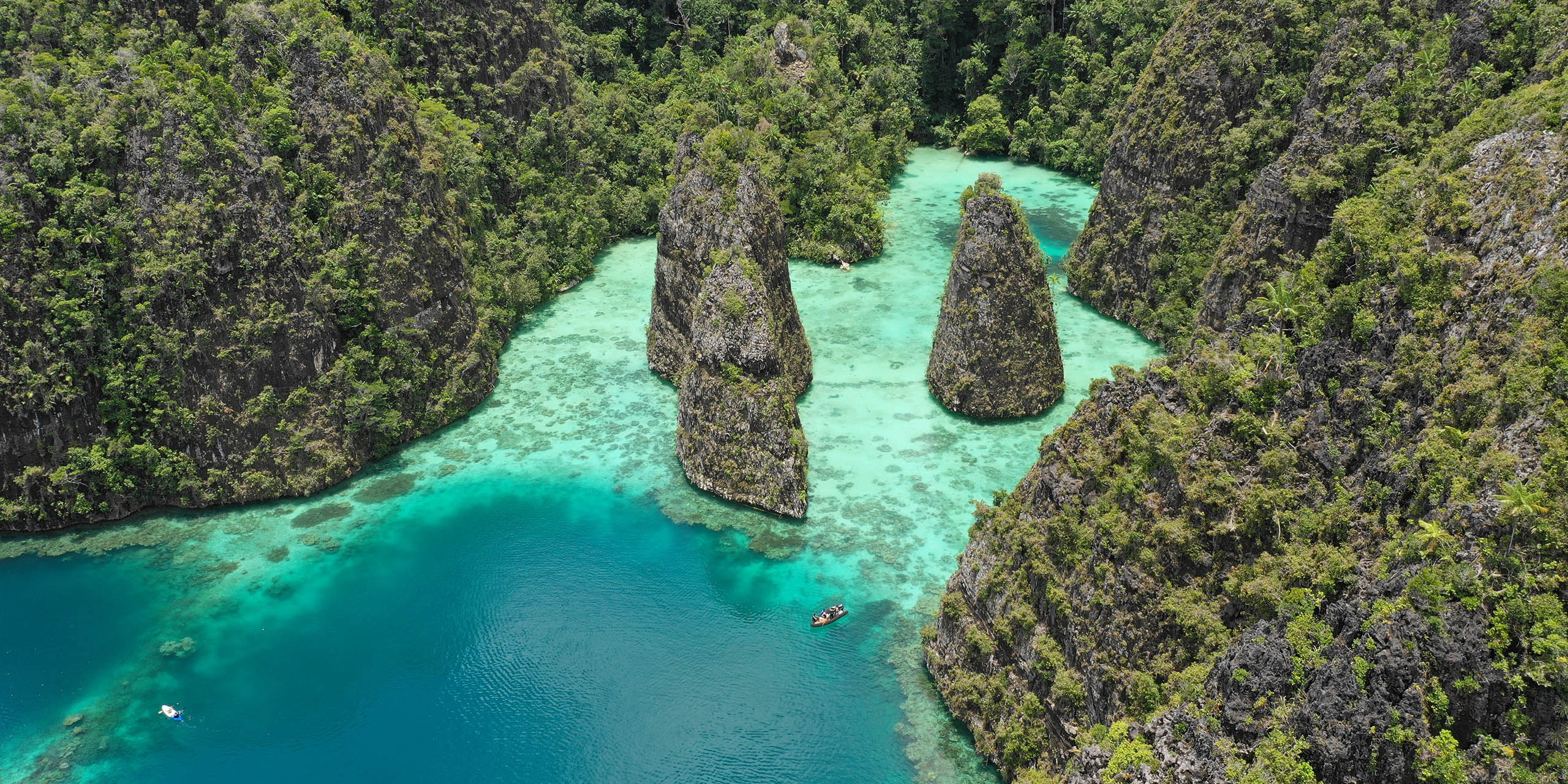 Two hard knocks on my cabin’s door followed by one wondrous word —whales!—has me instantly out of dreamland and rushing on deck. It’s our fourth afternoon on board, and we have just left the beauty of Waigeo Island, better known to most as the Raja Ampat Marine Reserve, behind.

Thus far, this trip through the sea of northeastern Indonesia has been nothing short of incredible: we’ve climbed deep into the forest near Bessir village to gape at the dawn dance of the elusive Red Birds of Paradise; we have chased manta rays and black tip reef sharks off the coast of Arborek village; and we have seen more unspoiled islands than most people glimpse in a lifetime.

The less explored northwestern seaboard of Indonesia has hardly changed for 200 years, since the time some of the world’s most daring explorers came to the Malay Archipelago looking for new critters and to test first-hand the farthest reaches of the known world. One of them was Alfred Russel Wallace, who spent almost a decade documenting this equatorial flora and fauna, fueling his wanderlust by amassing a staggering collection of more than 120,000 specimens of endemic insects, birds and mammals, most of which are still exhibited in some of the UK’s best museums and private collections.

It is said that during a malarial fever that forced him in bed for days in his acquired home of Ternate—a gracious north Moluccan island that’s almost entirely volcano, and an ancient sultanate that was a focus of the colonial spice trade—Wallace could do nothing but think and speculate on his discoveries. Mustering his theory on evolution by adaptation, he jotted down in a letter to his friend Charles Darwin in England. Upon receiving it, Darwin rushed the publication of his own essays on the subject, starting with a public joint-reading of his and Wallace’s work—forever changing natural science as we know it and linking the two men as its great godfathers.

“I know Alfred Russel Wallace thanks to my dad, who introduced me to his work,” says Penang-based Malaysian visual artist Rebecca Duckett-Wilkinson. In their spare time, she and her husband David Wilkinson have sailed to many of the eastern Indonesian islands, following Wallace’s routes aboard their own 20-meter-long, luxury, old-world-style phinisi cruiser, traditional of the seafaring Bugis people that we are sailing for ten days.

Custom-built completely out of wood in Bira and Makassar, Southern Sulawesi, and equipped with beautiful blood-red sails that, when they flap against the blue oceanic backdrop, give it a mean, cinematic look, the schooner feels like it cruised directly out of the 19th century.

“It just felt natural to grab Wallace’s The Malay Archipelago, and follow the sea routes he described,” Rebecca says. But this is the first time in a decade that the boat is venturing west of Waigeo, following the route of the last sea voyage described by Alfred Russel Wallace, from West Papua to his Indonesian home of Ternate.

“Wallace stopped in Bessir village, in today’s Raja Ampat, to study and collect specimens of the rare Red Birds of Paradise for two months, after which he wished to return to Ternate. Based on his book, this last trip was a nightmare. With favorable winds, it would have taken him about a fortnight; instead, Wallace described almost two months of incredible hardships at sea with no favorable winds, as if the ocean wouldn’t want to let him go,” Rebecca says as we embark. “Luckily, these days we have engines: we aim to follow Wallace’s return route in about ten days, with exploration stops on most of the islands he mentioned in his book.”

Rebecca refers mainly to Waigeo and Gag, in Northwestern Papua, and to Ternate and Tidore in the northern Moluccas. Since the early 11th century, these two competing sultanates, together with the Banda Islands, were the only sources for the cloves and nutmeg sold for exorbitant prices all over the Orient and Europe.

But after the end of the Crusades in 1291, with the closure of land trade routes to the Far East, Europeans decided to get a hold of the prized spices. Venturing uncharted seas and monsoons, the Portuguese arrived in Ternate and Tidore from India in 1521. When the Spanish, Dutch and British followed suit a few decades later, the spice monopoly was wrestled between European hands, and ultimately seized by the Dutch, who in 1602 formed the Dutch East India Company to profit from these far-flung tropical resources.

Sailing in these waters today, and especially in an old-world vessel, I still feel the weight of that history. For sure, modernity’s concrete homes, billboards, fishing boats and honking vehicles have also arrived here. But approaching Tidore and Ternate by sea, it’s the colonial forts of the Portuguese and the Dutch that still catch the eye first, soaring magnificently from the islands’ best view points.

West Papua was a different experience altogether: when we set anchor and take a dingy to Bessir’s jetty, a group of barefoot, cheery, shaggy-haired children in Yesus I Love You T-shirts greets us—these odd hints of globalization and Christian missionaries proffering the only hints of changes since Wallace trawled this remote corner of Southeast Asia. The kids lead us along an unpaved grid of lanes flanked by rows of tall coconut trees, a white wooden church and tiny homes whose occupants completely stop their daily errands, speechless, to observe us walk around.

We soon bump into the metal plate that introduces with much historical fanfare to what is believed to be Wallace’s former Bessir residence. But the tiny concrete home before us looks so different from the bamboo-and-thatch stilt hut reproduced in an illustration from The Malay Archipelago.

“It can’t be the same,” David gives his final verdict. Indeed, in the whole village there’s no trace of any simple bamboo huts: we conclude that since Wallace resided here, besides Christianity it’s concrete and bricks that contributed to change the face of Bessir forever.

We depart amid children’s laughter only after dispensing a few tablets to a kind-eyed village elder, who had courteously asked if we could offer something to nurse his dry cough. “We are quite far from any well-stocked pharmacy here,” he said. Back on the boat, we are welcomed by the ever-attentive crew who, contrary to Wallace’s perennially sick seamen, are always awaiting with a smile, a fresh drink and hot towels to rinse off sea salt and sweat from our faces.

Before leaving the Dampier Strait behind and heading across the Halmahera Sea to the Moluccas, we take in the beauty of the surroundings—both above and below the waterline. The divers among us set out on the dingy to plunge down at Manta Sandy, a famous dive site near the village of Arborek.

With regulators clenched between our teeth, we sit in a single line on the bottom of the sea, waiting. After half an hour, just about in time for our safety stop, something approaches swiftly out of the deep blue: it looks like a floating, dark and flat hat, sinuously bending at the seams. I’m so shocked upon seeing my first oceanic manta ray that I can barely believe there’s another flapping behind… and then a third, bigger one. They float next to each other in circles, giving us a good peak of their outlandish shapes.

Ahead of us is a long night sailing to the channel southwest of Halmahera Island, from where we will slide up to the famed Moluccan spice sultanates of Tidore and Ternate. It’s a long haul on a rocky sea, so the next day the crew drops the anchor in a secluded bay, and we all rest next to the uninhabited islets around Salleh Kecil. We dive, kayak and snorkel around shallow coves whose corals, from the boat, seem like they have been sealed under sheets of transparent fiberglass.

The next morning, we make a stop in Tidore, an orderly and clean island dotted by rugged colonial forts that have seen many lords exchange crowns over the years. The sultan’s palace, however, is closed, and we end up checking out the lively market, where stacks of cloves, nutmeg and many of the other spices that supported empires of old still lay in carefully crafted displays.

Breathtaking Cruise from Maumere to Ambon

Cruising Indonesia with Aman: Eight Days on the Equator

Cruising the Komodos with Aman

One night and a couple dives later, and we are bound for Ternate, just a short hop across the strait. Gamalama, an active volcano, makes up most of the island; puffy clouds float around its perfectly cone-shaped summit as if they are the aftermath of a violent eruption. Our red sails engorge in the wind, taking us in front of the main mosque, set along a seaside boulevard dotted with low-houses and lively markets, slung like a heavyweight belt of modernity around the flanks of that watchful, never dormant fire mountain. Like Wallace, we have arrived safely at the end of our journey, but besides a few seashells and colorful rocks, we have no specimens left to document this mightiest of adventures—presumably a lifetime of memories will suffice.

From the top of Fort Tolukko, a beautifully preserved, ash-black Dutch fortress perched between the volcano and the bay below, we take in the majestic views of Ternate’s coast, stretching across the strait to Tidore, and to the cone of the Jailolo volcano in nearby northwestern Halmahera. The schooner, a red and wooden dot in the bay below, rocks quietly over the waves, and though it’s easy to feel the homey sense of these three sibling shores, the phinisi seems to beckon for more adventures at sea.